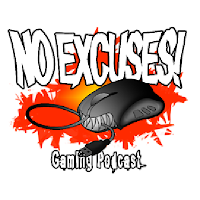 This week, why? Nintendo does a thing and announces a whole slew of stuff, including release dates for Star Fox Zero, Monster Hunter Generations and more. Also, a game of his own for the worst character in existence. Plus the fourth game in the Deponia Trilogy, impressions on RWBY and hands on with the newest Digimon game.


This week, Insert Digimon theme here. The next Hearthstone set has oozed it's way into the news, complete with Old Gods. In related madness, Legion looks bleak for tank players. Also, anime so bad the brain rejects it, hands on with the Playstation TV and more Digimon than you can shake a stick at.


This week, Disaster! A storm of newsy nuggets, including a new Oddworld game, rumors of a Playstation 4.5, The new Street Fighter live action series (It's awful) and Ark as an Esport. Plus, Fern's Skype is "Helping" so the train is immediately off the rails. you have been warned.

Have something to say? Send your emails to noexcusesvtw@gmail.com. Or tune in live at 9pm EST Saturday to interact directly with the show via IRC!