Ken is off working this week, so Wayne has invited author, Jon Wasik, back to the show to talk about what he has been up to with The Sword of Dragons series and to help Wayne talk about all things geeky.
The VtW crowd has started playing the recently brought to the US game, Blade and Soul. Everyone is playing on the Iksanun server in the VtW clan. Wayne is getting prepared for this coming week's Gamefest by suggesting people also check out the recently re-released Half-life co-op mod, Sven co-op. It is now a standalone download for free on Steam.
Jon has never heard of League of Legends, ARAMs, so Wayne explains things to him.
Wayne also spent some time helping his friend Bruce get ready for Gamefest by helping get a frankenstein computer put together and running.
A new Sy-Fy show has finally met with Wayne's expectation of good science fiction with the show The Expanse. He also explains what he means by Sci-Fi porn. Jon also shares his thoughts on the new Star Wars.
Wayne then gets into the meat of the show and asks Jon about his book series and the web content he has released with The Orc War Campaigns, the bridge story between the first and second book of the series. Jon lets us in on his writing methods and his plans for all of the books in the Sword of Dragons series.
The guys follow up a little bit on some of the things Wayne saw at CES.
And Wayne has finally done it. He has realized that he is no longer a kid and has no imagination. 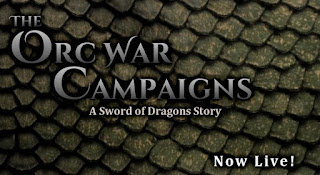