This isn't a post about everything at Denver Comic Con 2014 but to wet the appetites, I thought I'd make a post about my pick ups and autographs I got this year. There will be a new episode of Tales of Relevant Thought this Sunday and we should have a Flickr up some time this weeks with all the photos we took! We have some EPIC stories to tell and in depth thoughts and feedback on the Con. Until then, lets dive into the cool things I snagged this year(images will appear below descriptions).


For starters, this Ms. Marvel sculpture(by Jason Smith) in her original costume from the 1970s. I was super pumped to get this, I've been wanting it since I first saw it at the end of last year. With the base, it is 12.5” tall. Ms. Marvel is one of my favorite super heroines. The lady at the stand this was at only had this one. This piece is # 33 out of only 750 made. I was like: 0_0 and FYI, it cost $200.

Moving on to another Ms. Mavel pick, this Marvel Universe Diamond Select Toys Ms. Marvel bust showing Carol Danvers(in her pre-Captain Marvel costume) grasping an American flag. It stands 6” tall and is # 770 out of 2500 made. I saw this and really wanted it. Now, I'm not really the “patriotic” type but I never seen something like this before. I like how the flag is there instead of her normal sash(which is behind the flag, buy you know what I mean). I really respect the design to show a fictional character show support for their country. Really speaks to the character. Cost me $45. 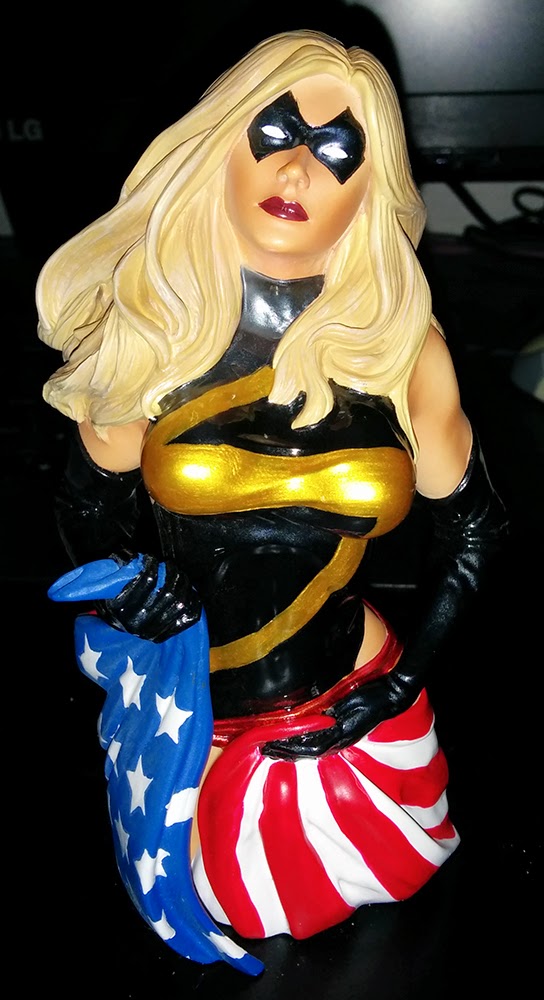 Next up, the Play Arts Super Street Fighter IV Arcade Edition Ken Masters figure(don't know what the difference would be between this one and say the SSFIV or SFIV Ken figures would be...but, whatever). It's obviously meant for posing, not actual play, but it comes with interchangeable faces, hands and fire that can be attached to his fist(personally, it's that stupid clear like fire that you see on DBZ toys, which I hate). Only issue I have with this is that the stand is a piece of shit. You construct a somewhat claw to hold the figure. I would have been satisfied with pegs in the feet. The figure more leans on the claw instead of being held in place. And the hands are easy to remove but the other fists are just impossible to put on. And good luck changing the facial expression. You have to remove the head but it's on so damn tight I'm afraid I'm going to break it. So, I stuck him with his fighting pose in the game. Probably won't mess with it more than that. Overall, it is kick ass. About 9” tall with the stand. Cost me $75. 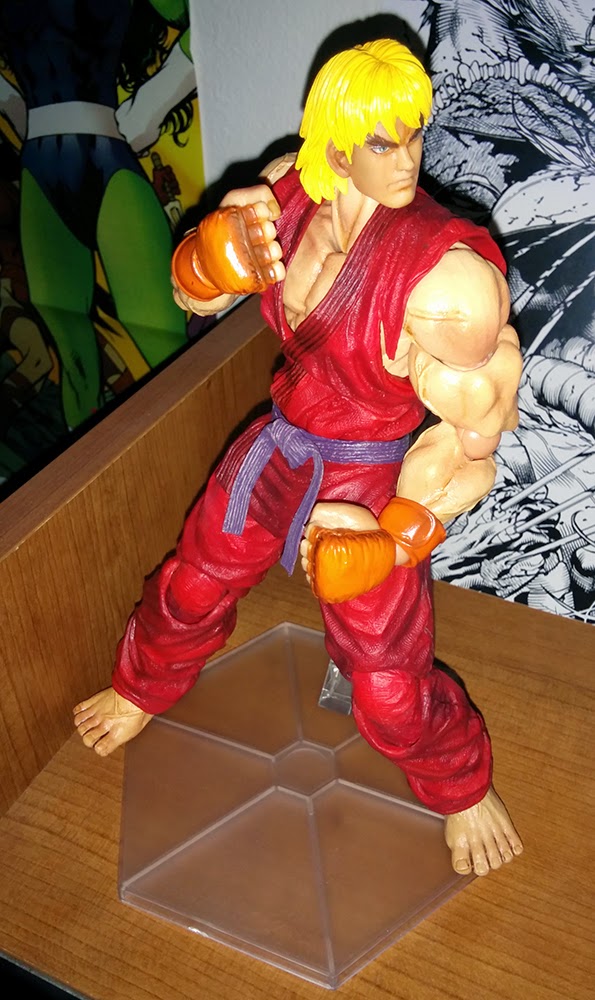 Here we have The Sky, The Art of Final Fantasy by Yoshitaka Amano. I have always loved his artwork with Final Fantasy, Vampire Hunter D, Sandman; guy is epic. If you're an FF fan, you know. It's a three book set with all his art work for Final Fantasies 1 – 10. It's beautiful stuff and you really see how the game designers took some his work and put it into the game(especially with his monster designs). Cost me $80. 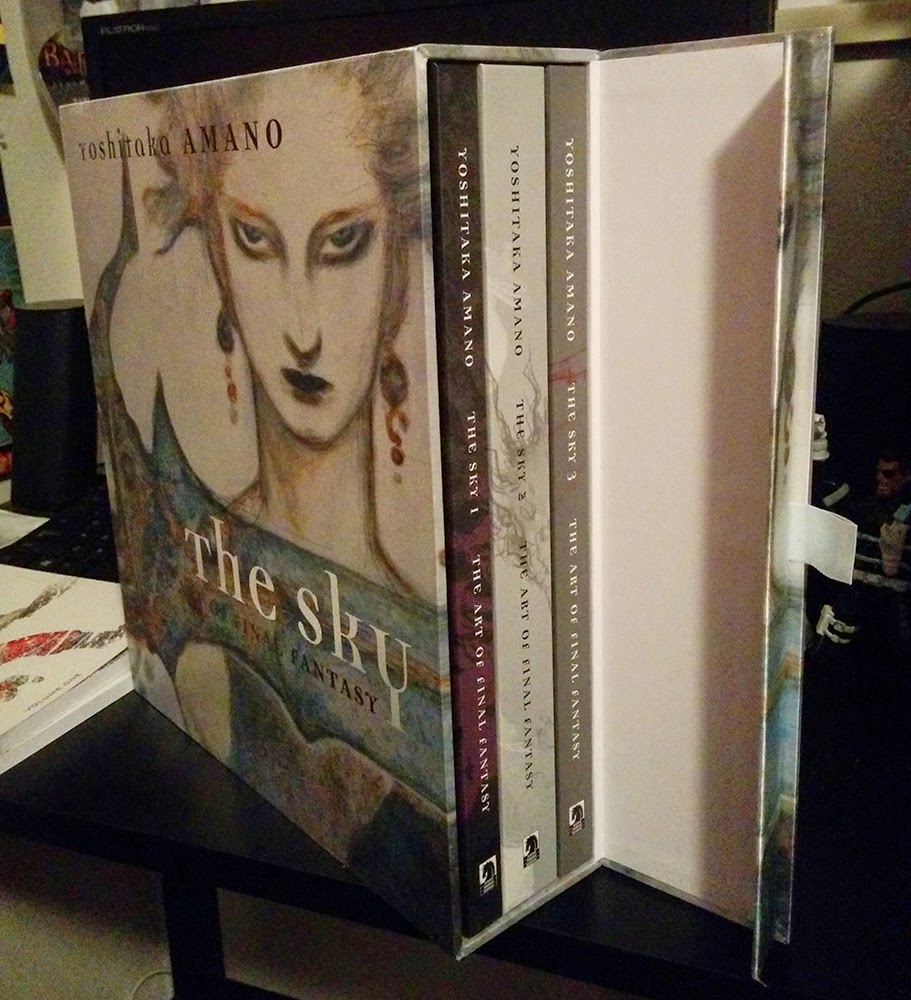 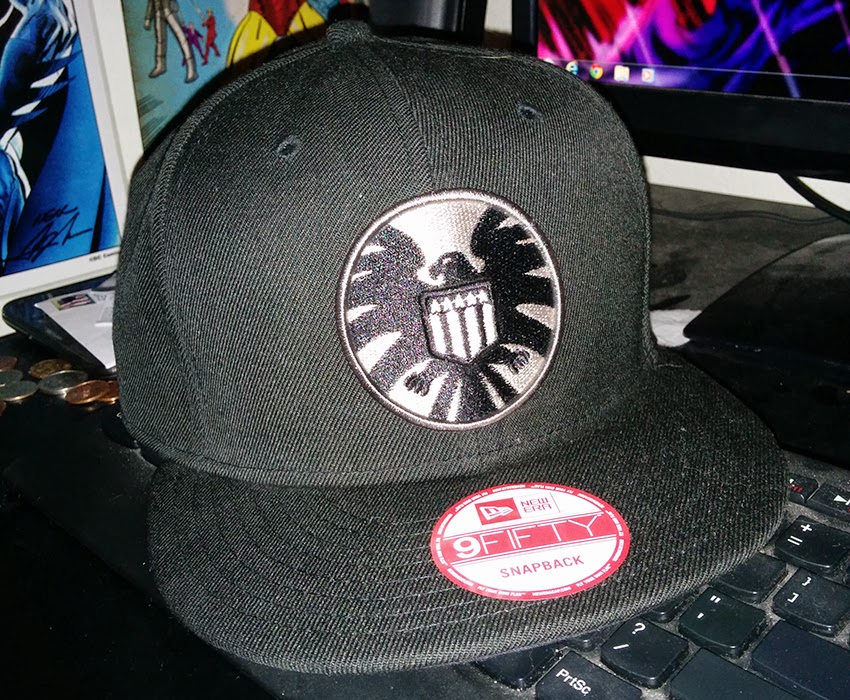 Of course at comic conventions, you can find graphic novels super cheap, usually $5-$10 bucks a piece or 50% off. I didn't look too long because I grabbed a bunch last year, but here are some random pick ups that I liked. I really wanted to pick up Shadowland and the Hercules one just looked too damn cool to ignore. Cost me, about $50 if I recall. 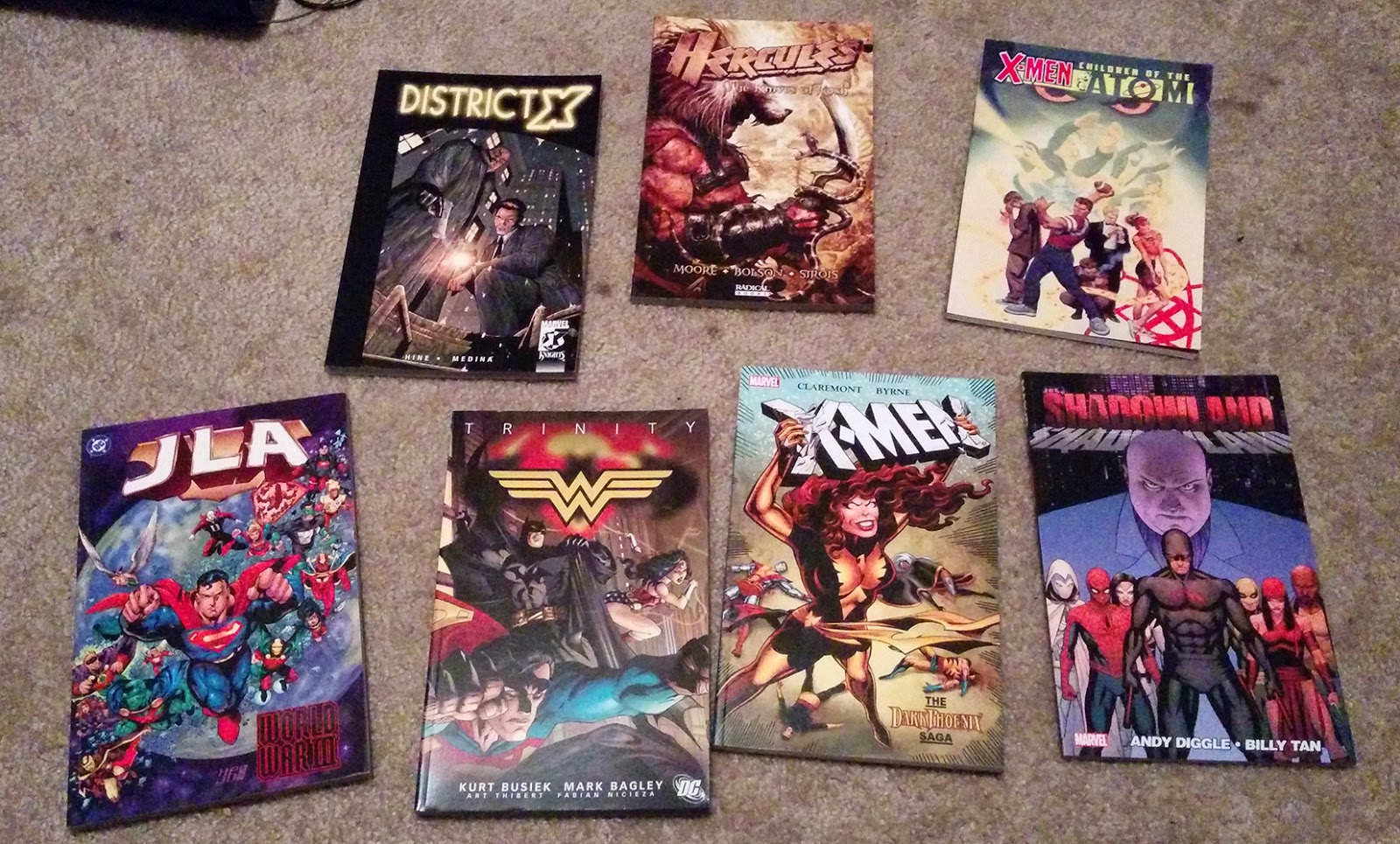 Below are some random comic issues. Most came in a mystery grab bag for $5, the Captain Marvel comics I got were $2 a piece. So total, only cost me about $9. 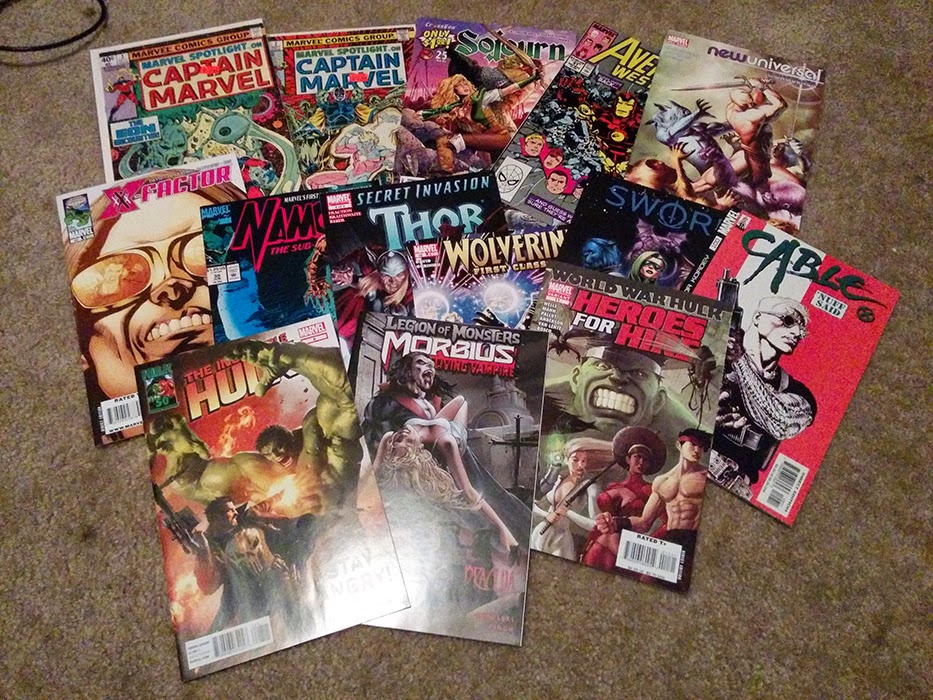 These were two free shirt I got at the con. The blue one was for having the Speed Pass which came with a cool tote bag(which was a life saver) and the gray one I got for free for going to the Four Color Mixer. I made it a point to not buy any shirts this year because, well, I have too damn many of them. 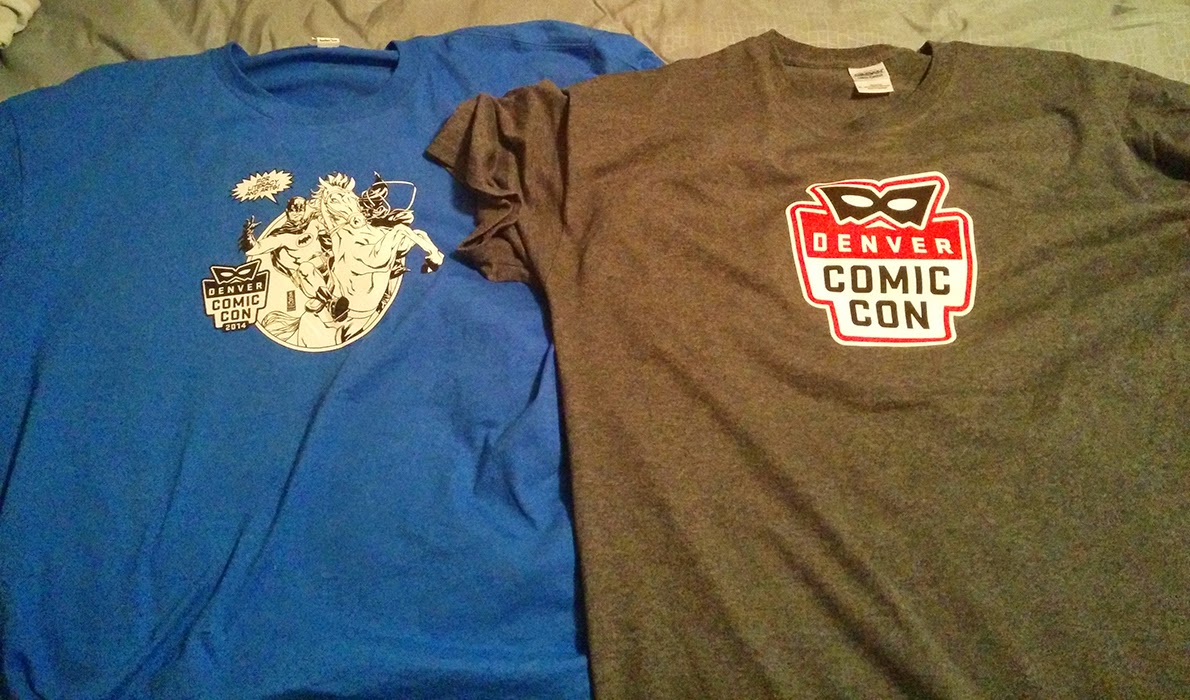 Now lets move on to books I got signed. To start off, I bought issue #1 of Crisis on Infinite Earths and got it signed by George Perez(artist). George Perez is a super nice guy(as I have detailed from the last DCC) and watching him sketch is awesome. I actually read Crisis on Infinite Earths very recently and was able to find this issue at the con(read it if you haven't!). Book cost me $22 and the autograph was, of course, free(thanks again, George!). 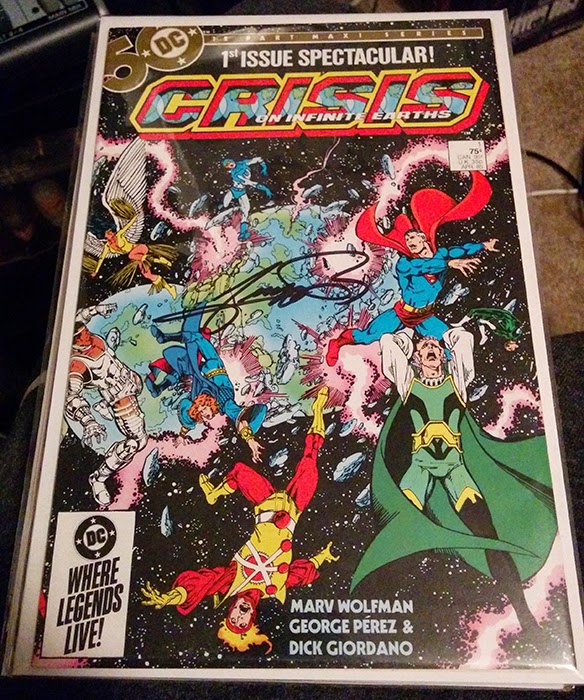 Next is an issue I've been trying to find for a long time. The Limited Series Wolverine #1 by Chris Claremont(writer) and Frank Miller(artist). Now, I got the other 3 issues for super cheap, but I had to bust open the wallet for #1(there were so few there!). And to my surprise, Joe Rubenstein(inker) was there. Cost me $75 for the comic and $1 for the autograph. 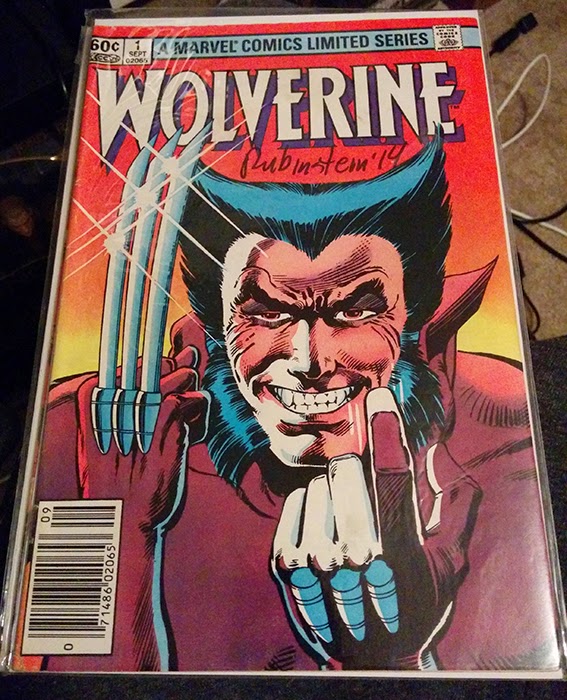 Moving onto Steve Lieber. I originally went up to his stand to have him sign my Gotham Central #37, and then I noticed some books there, including a comic I've heard about and always wanted to read, Whiteout(written by Greg Rucka). I was so pumped and purchased them both. He signed them and also drew a cool sketch as well! The books cost me $25 and the autographs were free!(I think he did the sketch because I bought the books, not sure though). Thanks again, Steve! 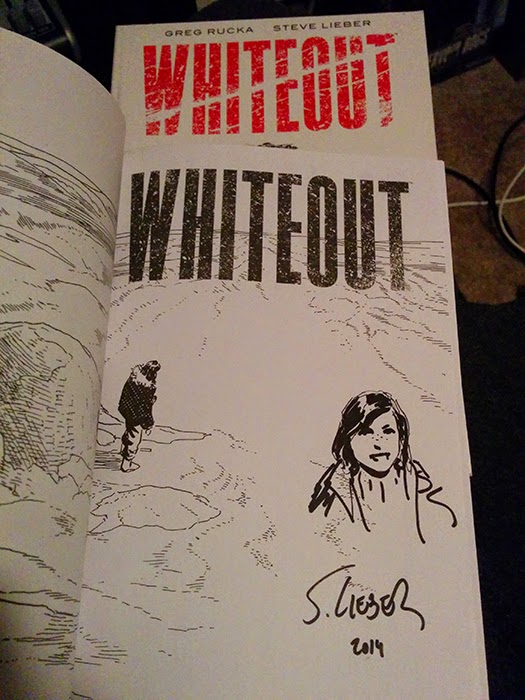 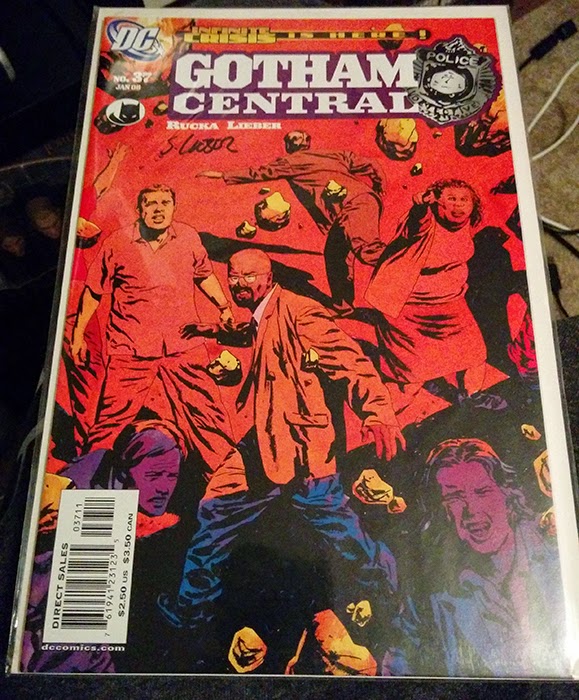 Next isn't a pick up but some autographs. I got my Batman Odyssey signed by Neal Adams(writer/artist) and Michael Golden(inker). Get this, Adams' signature was $20 and Golden's was $5. Yeah, I'm never getting a Neal Adams autograph again. I mean, I don't even think he deserves a thank you. So I'll just say, you're welcome, Neal. I guess you need it more than I do. Thanks again Michael! 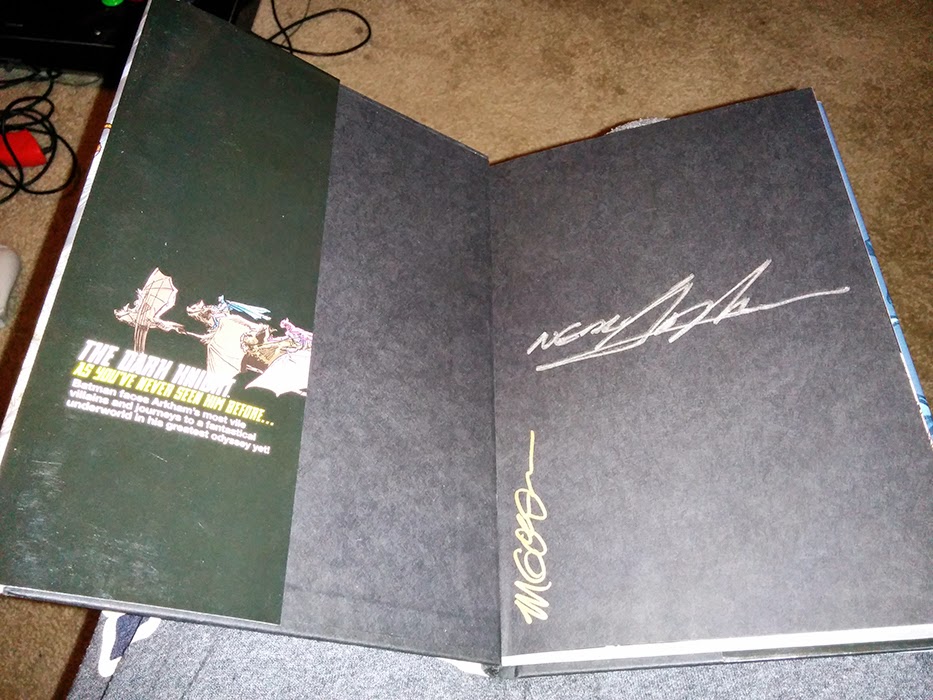 Finally, Tim Sale signed my Absolute Batman The Long Halloween. Even added a cool little semi-Batman sketch on there. He didn't charge. Tune into to TORT this Sunday so you can hear me praise this guy. Thanks again Tim, you fucking rock! 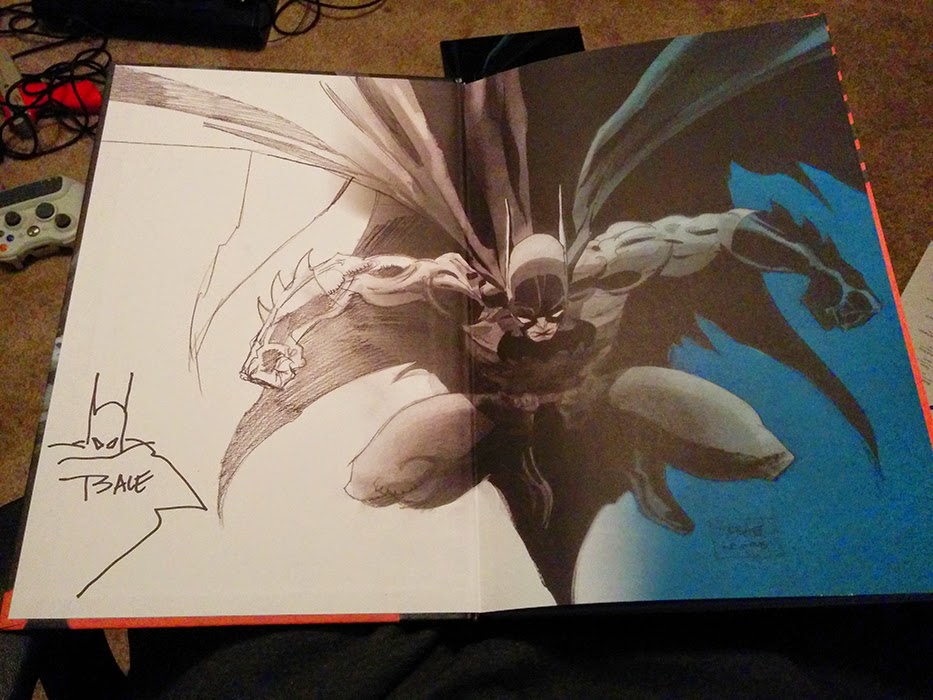 So, that's all I spent on pick ups. The grand total was only about $625. I use the word “only” because I thought I spent WAY more than that on merchandise. God knows what I spent on booze and food. But it was a hell of a time and I can't wait to go back next year!


Make sure you check out Tales of Relevant Thought this Sunday at 5pm EST where myself and the boys talk everything Denver Comic Con 2014!