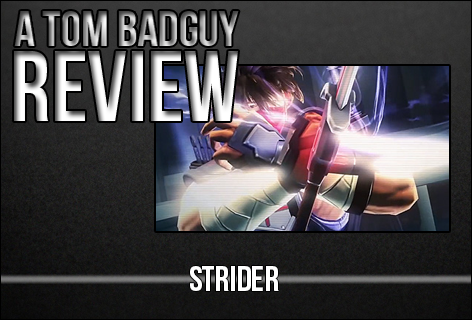 So, the Steam Summer Sale has ended and I still have lots of games to play. I praised Game Dev Tycoon in a previous review, but I want to now look at the other side of the spectrum. What game was not so good? This leads to Strider, developed by Double Helix Games and published by Capcom. Now, I never played any of the earlier Strider games. My only experience with Strider is using him in the Marvel Vs. Capcom series. Also, I've been hunting for a fair priced copy of Strider 2 on the PS1 so I could play the previous Strider games(no luck so far). But when I saw this game on sale on Steam, I really wanted it. Little did I know that I would be whisped away to the land of mediocrity and continuous button mashing. Lets take a look at Strider and find out why I think this game puts me to sleep.

Ok, so, the game starts you off right at the beginning of the stage. No intro, no nothing. I'm fine with that. I go through, hacking and slashing enemies and what not, and this goes on for about the first game hour. You learn how to control Strider's movement, see what the buttons are, etc. Then you fight the first boss and gain access to a new area when something weird happens. There is a voice over an intercom talking to citizens of the city...wait, I'm in a city? With like, actually innocent people just walking around? That's kind of weird. And why did all of a sudden some face art appear of some guy talking to the city? Is this important? Is there an actual story in the game? There was no nothing to let me know this before. Why am I doing this? Is that guy really a bad guy? I literally stopped and pondered. I honestly thought this was just going to be an old school hack'n'slash so I didn't really think of there being a story.

Honestly, I don't know what the story is and why Strider is doing what he's supposed to do. Later, there are even cutscenes...why? I don't know why I'm doing what I'm doing?! I'm assuming Strider is just assigned to a job and doesn't ask questions because that's how it works. Plus, I just skip the cutscenes any way(when it fucking lets me) because I'm so bored playing the game, I don't care. Why is it so boring? Because it's very monotonous and repetitive. Hack enemies. Beat boss. Repeat. Now, this would be fine if the game was just focusing on going from point A to point B, but no, it attempts to pull a Metroidvania style map system, key word TRIES. You know what made Super Metroid great at this style? The player's interest in the game. The fact that you had a burning passion to discover secrets and the glory of exploration. In Strider, you don't have bad ass guns to use, just an arm sword. The settings are very bland and dreary, the music is awful, so you don't really feel involved with the environment. Instead, it seems they try to force a shitty story down your throat.

Very poor dialogue and uninteresting characters. Like, you fight 4 goddesses of wind (North, South, East, West), ok, does wind direction have something to do with the game? I don't think so. The game does a poor job of sucking the player in and just assumes, at least, I feel, assumes that the only people that play this game are hack'n'slashers that just want to burn through the game as fast as possible. I don't really feel like the game was completed during its production. The lack of any background at the beginning of the game turning which then turns into several story and dialogue points feels just out of place. As if the game didn't know what it wanted to be.

The gameplay isn't too great. If you're attacking with Strider normally, or using any of the face buttons on the controller (A,B,Y,X) it's responsive. But Strider gains these abilities to use his Options(the bird, panther, etc) and here's where it gets stupid. You have to HOLD LB and then press a face button. You can't just easily tap LB+whatever button at the same time. No. You have to hold it for at least 1 second. At first, I thought something was wrong with my controller. But no, you have to hold it. And why? Why would I have to do that? I have 4 buttons on the front and 4 buttons on top. That's 8 buttons. In fact, the Y button is useless. Let me explain, X is basic attack, Y is a pop up attack, B throws kunais, and A is used to jump. Why is the Y button useless? Because you can perform the same attack by htting up and X. I mean, why does it have to be so difficult to use Options? I thought one of Strider's bonuses what his speed. I mean, he's a fucking ninja/assassin/weapons expert....guy. Why do I have to hold a button down? Strider has 4 options. Ok, why can't all 4 shoulder buttons each be an option? Can we just utilize the whole controller, please? And I don't care if you can customize it in Settings(I don't think you can). It's stupid that I would have to do that. It's so annoying to activaite Options, that I don't ever use them because I forget they're there, just like playing this game. I forget why I'm fucking playing it.

Then the game tries to make it Metroid Prime like where you have 4 different blade types(Standard, Plasma, Freeze and Magnet). Some enemies can only be hit by certain blade types. This is just bullshit. It's a simple gimick to just make the game seem longer. I don't recall using different blade types in MvC. Why would this have to exist? Look, game, either be a simple 2D hack'n'slash and focus your budget on GFX and make it look cool when I kill shit or be a Metroidvania game, meaning, you have to put work into the levels so it doesn't look like I'm traveling through a grey, industrial future like in 1984. Seriously, the settings and background are SO BORING. I just want the game to end so I never have to play it again. Which leads to my final complaint: weird ass difficulty spike.

Seriously, this game is pretty easy as you play through it. But I'm at the end of the game going up this elevator and it's just hard as shit. You just take on wave after wave of bad guys and I can't get passed it. Some guys shoots purple lasers I can't reflect that just drains my health, then I have to fight flying robots I can't reach that shoot heat seeking bombs at me, and then fight two giant robot crabs that launch freeze grenades and just hold me there until I'm dead. What the FUCK?! Why did it get so hard all of a sudden? At this point, am I supposed to be mastered in all of Strider's stupid tools that I can deal with a brutal onslaught like this? I'm sorry, the game is so dull I didn't give two fucks to probably learn how to play it correctly. I'm surprised I stuck it out this long. I may not even keep playing, I don't think it's worth it. The only ray of sunshine out of this is that I got super discounted on the Steam sale. Are all the other games like this? If so, I might just avoid them and remember Strider for being bad ass in MvC.

I mean, what the fuck, Capcom? No wonder there's talks of your company being bought, you can't publish anything decent any more unless it's Street Fighter, and that's only going to last for so long. But I guess I can't really expect too much out of Double Helix Games. As far as I can tell, the only successful game they've made is the new Killer Instinct. Their other titles include Silent Hill: Homecoming, some GI Joe game and Battleship. What the...BATTLESHIP?! Like the MOVIE Battleship?! (checks Wikipedia) Oh, fuck, it is the movie?! Jesus Christ, why?! Why do the assholes that made a shitty game based on a shitty movie get to make a fucking Strider game?! God damn it, and god damn you, Capcom!

I guess I should have known that Strider was going to be a let down. Did anyone see the latest PSN trailer for their free games this month? Strider is one of them. Look at this promo and tell me this is not the WORST promo for a fucking game:

Seriously, if you want to play Strider, I wouldn't pay full price for it. Get it for free on PSN or only if it is discounted. I'm super disappointed and this game does not speak well for the character.