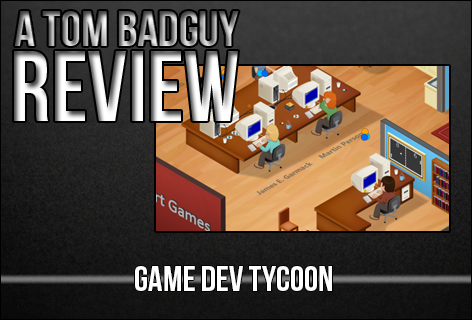 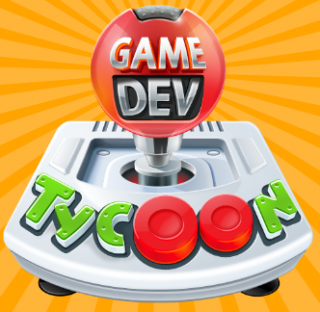 So, they say that crack is addicting. Those poor souls never played Game Dev Tycoon. I've seen the inspiration of this game, Game Dev Story, played by my good pal, Numb Renditions, and thought it looked cool, but never played it. I then saw Game Dev Tycoon on the Steam sale and I had to get it. And OH MY SWEET MERCIFUL CRAP IS IT AWESOME. I haven't played a simulation game since, like, I don't fucking know, the last time I played Sim City 2000 like over a decade ago? I literally played that game all day until the end. 7 – 8 hours. It sucked me in hardcore. Lets dive into it and see why Game Dev Tycoon got me all hyped and shit.

Game Dev Tycoon was released on Steam on August 29th, 2013 by Greenheart Games. The game was inspired by Game Dev Story by Kairosoft. Now, I don't know if Kairosoft is cool with Greenheart Games or if there is maybe some controversy about this game or what, so I'm just going to ignore it and look at this game for what it is. Obviously, I can point out that Greenheart Games didn't originally come up with this idea and the two games look similar. Just throwing that out there to keep in mind.

Please stand by for quick overview of the game in which all reviews, for some reason, must explain. In Game Dev Tycoon, you create games, designate how much time goes into each part of it, then release for sale. Based on the review you get(which is 4 reviews averaged together) determines the success and money you make. Along with this, you can create your own game engine, research new ways to enhance your game, when you get bigger, higher a staff to help, train yourself and your staff to better at Design(which helps with game design – FUCKIN' DUH!), Technology(which helps with – you know), Speed(which helps finish projects faster), and Research(which, I think, increases the amount of Research Points you receive). Games are better when your stats are higher, the more Research Points(RP) received means the more tools you can acquire. You can do contractor work to earn cash and RP(which is highly recommended, these fucking things go FAST). You can either self publish games or get a contract from another publisher(in which you have to meet a certain review rating). Employees can be assign Lead positions that open up things like R&D departments and even a Hardware department you can use to create your own console.

To sum it up, the idea is to find out which games sell the best and try to make as much cash expand your business as you can within the game time of 35 years. You are able to name the games, consoles, and game engines and even make sequels from them. Players start in the past during the PC days, then go through each respected era as consoles are released(8-bit, 16-bit, etc.). Of course, you can't go bankrupt otherwise it's game over. That's a brief overview. Which I hate. I never liked having to break down how to play a game. It's annoying and boring. Text does not show you how awesome it is. I think for now on, I'm just going to post the game trailer and you can just watch that. Yup. Sounds good.

Ok, moving on to the important shit, which are my impressions of the game. I love it. It has been a good while since a game like this has sucked me in and it reminded me why people love simulation games like this in the first place. Not 100% of the game itself, but the way it forces your imagination to play another game inside your head. Let me explain and this did awaken my inner child. I'm titling games and viewing their successes. Creating what I want. After the first couple I made, I would start imagining what the game would actually be like in my head. What would lead me to make that game? What are the characters like? What's the story? It is was all unintentional. And then when a game gets a great review, you want to carry on with it later when you develop sequels for it. There is also a part in the game where you go to a big convention, called G3(get it? Der) where your latest game is showcased and you get a count of the amount of people that visited your booth. I had a two popular series I kept sequeling here and there that continuously got high scores, a medieval/RPG called Millennium Gate(I made up to 5 of them) and a Medieval/Strategy game called Millennium Ages(made up to 5 as well). Whenever I had a booth with these games when I made them, my crowd counts were the highest. It was like my company was being loved for a specific game series. It's just really cool.

Now, the best part about this game, is that if you know the history of gaming, you can use it to your advantage. For example, gaming got huge when the NES came out, so when it comes out in the game, invest your games in it for more success. Remember how the Game Gear didn't do shit? Then you would want to avoid making games for it. The other part is that you will do better with games you have experience with. For me, I like RPGs. So when dividing up time about what should go into a game, I took what I knew and was successful. But then Horror/Action games(I had a long running series called Samurai Demon which saw random reviews) I knew nothing about, so my scores were all over the place. When you make a game you get to research a report on it to unlock what works with what(genres mixed with topics, what to put more or less time into, etc.). The Samurai Demon series I was making was the funniest because I wanted to make really crazy Japanese sounding game titles that didn't really make sense. So Samurai Demon turned into Samurai Slash Demon Curse 5th or Samurai Exist Demon Epic Clash Xrd. Fuck, this game is so fun.

Addicting gameplay that forces a childlike smile to your face. I love that shit. You'll have plenty of involuntary moments where you'll catch yourself grinning like a fool and fist pumping when you're game gets a kick ass score. Oh, and one more cool thing. After you create games, you and your employees level up skills to become even better at what you're making. So there is an RPG element added that drives you to improve. The game has everything. Another kind of fun thing is, it's not that difficult to play. You don't have to be a strategy master or a sim master to understand or play, it's pretty casual and I liked it. If they were to continue making more versions of this game, I would like them to keep that thought in mind. 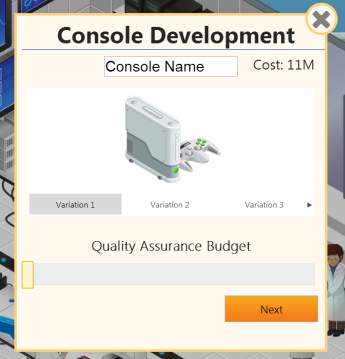 So I'll take that cue to talk about what I'd like to see if there is a sequel. Of course I would want things to be more in depth, but still keep the casual style. It would be cool if you could import your own game pictures, make break down how times is developed in the game with more sub categories. Also, I would love for it to be longer. You can keep playing after the 35 year mark, but no new consoles are invented. It would be awesome if they expanded on that and put in their thoughts of what the future of gaming would be for the next 35 years. That would be awesome. And the ability to hire more staff and work on bigger projects. Now, I haven't entirely seen all this game has to offer. You can use the R&D Department to even hold your own convention to gain fans. But the game finished before I could go beyond that and it was like 4 in the morning so I needed some rest.

Overall, Game Dev Tycoon brings an enjoyment I have not felt in a simulation game in a long time. It's casual and addicting gameplay coupled with it's charming time line of gaming history makes this a must own. Now, do I give big massive credit to Greenheart Games, even though Game Dev Story came out first, yes and no. First off, regardless if the idea wasn't original, it's a good game. If it was their original idea, then my praises would be sang from a mountaintop from on high. But since it's not, I will just say, good job and make a damn sequel.


For more on Greenheart Games, visit their website: http://www.greenheartgames.com