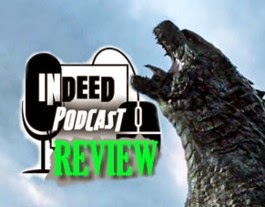 SO, I did something I have rarely done in recent years.  I caught a prerelease of a movie.  I went and saw Godzilla with my son and I would like to say I couldn’t have been more please with my choice.  I came across this statement about it on the web:

"Edwards' 'Godzilla' is a pleasingly paced 3-D spectacle that pays chilling homage to the artful legacy of the original 1954 film -- Ishiro Honda's 'Gojira' -- while emerging as its own prodigious monster movie." -- Jessica Herndon,AP

Now unlike Pacific Rim where I was looking to see big robots fight big monsters and I didn’t give 2 cents to the horrible plot they intermixed.  Godzilla was bringing back a touch of what I loved about the franchise, excluding the 1989.  When Godzilla first lumbers on screen to hunt the MUTOs ,he feels both nostalgically familiar yet creatively new.  They added a mix of Eagle, Bear, and Komodo Dragon to his movement, expressions, and fighting style. The human plot of the film is set around a family broken because of an event related to the monsters, and witness the destructive toll it takes on them.  But the build-up behind the where and why’s of the giants creatures make you think, “Hey, that’s plausible”  and doesn’t stretch the science behind that any further or create new terms to explain something.  The story focuses on our reaction to a new threat that we now come to accept.

The acting by Bryan Cranston (Joe Brody) is amazing.  His expression and reaction to the world around him is presented in such rich emotion that I would not be surprised to see a few awards for his performance in this film.  As for the rest of the cast….flat. Again, I did not come to see the film about human survival and heartfelt stories.

I did come to see Godzilla kick the crap out of other monsters and in this film you get to see this.  Not a lot of direct, in your face, footage.  Edwards uses several views from ground level, through windows, and even on TV. He was creative how he brought you the coverage of the battles and destruction they left behind them.  This unique filming again took a big piece of the traditional films and added a newer touch to them.  Angle and color were rich and help hold your attention from start to finish. Godzilla is not a complex or evil creature, but one which serves a purpose and give no thought o the little humans around him.  For example, have you ever waked over a ants nest.  Did you pay attention to the ants when they react to your intrusion?  You most likely went on your way with some other goals or task in mind.  Unless you are one of them kids who go,"Oh Looks, Ants.  Where is my magnifying glass?"  You cruel bastard.  Still they way they show Godzilla around the humans give him his own expression of understanding.  Done very subtle yet profound during the film.

I am sure they will have some negative things to say.  I am sure some will point out errors in different shots.  If you are looking  that powerful, kick butt, feel good movie. At the end it was nothing but applause for the King of Monsters.
Posted by Tabaxion at 12:47 PM