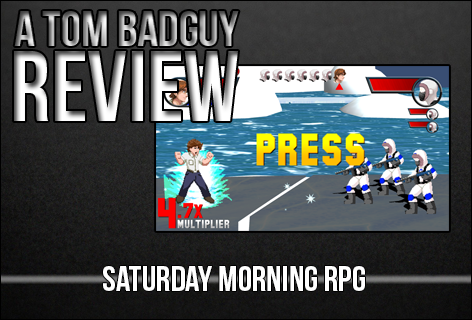 Before I start, I want to give a special shout out to Ben Moore, the Marketing/Project Manager for Mighty Rabbit. I really appreciate the confidence, bro.

So, like a lot of gamers, I was browsing through Steam the other day and noticed a game on sale. Saturday Morning RPG. I thought to myself, “Ok, I have to see what this is about.” I clicked on the Store Page and then saw the description: “an episodic JRPG set in a world heavily inspired by 1980s Saturday morning cartoons and pop culture.” How the hell could I not buy it? I made the purchase off my phone and after work, got it downloaded. Saturday Morning RPG is made by Mighty Rabbit Studios, creators of other indie games as well like Cylinder, a game available on Xbox Live, and also their most recent game called Breach & Clear, available on iOS and Android. SMRPG is also available on Mac, Linux, iOS, and OUYA. It made it's Steam debut on January 29th, 2014. SMRPG was an indie game that got it's funding off of Kick Starter. It seems more and more people are finding the great use of Kick Starter. I think this is a great help for any person or group to help get their creations made.

Players take control of the main character, Martin “Marty” Michael Hall(ha! Get it?) as he fights against the powers of Commander Hood and the Hood Army. Each story point takes place over 4 episodes(like a TV series) starting in Marty's dream world, to his high school, even a to a very familiar, Transformers-like dam(I think you can tell by now that there are MANY references in this game). Through turn based combat and exploration, Marty collects weapons, items and stickers for battle boosts to find off the badguys. Really isn't too much to it. Where this game sucks you in is through hilarious references and nostalgia of the 80s. Marty even gets a friggin' hover board to traverse the world with. I can honestly say, just Marty using the hover board in Saturday Morning RPG is hands down, better than the Back to the Future game on the NES. Now, I know this doesn't speak highly of something when compared to that NES piece of garbage, but any chance I can take to shut it down, well, god damn it, I'm going to take it.

Graphically, the game is a fun blend of pixelated, retro sprites and 3D graphical backgrounds and objects. The sprite design just reminds me of the old school NES and SNES RPGs I played. Ok, this game is just a trip down memory lane, ok? Old feelings and memories will come up, so get used to it. Coupled with an enjoyable musical score by a composer some of you may know, Vince DiCola. DiCola composed the scores for Rocky IV(1985) and Transformers the Movie(1986). When I learned this, I was amazed. Someone involved in the Transformers animated movie gave a part in this game. I mean, the more you learn about the game, the more you start enjoy it. It is brilliantly riddled with everything an geeky, 80s enthusiast would want.

SMRPG comes with a unique battle system. “The Wizard” grants Marty a notebook and the ability to use magical items to attack foes(and by “The Wizard” I mean Lucas from the movie, The Wizard...it's so bad...yup, went there). You can place stickers on the notebook which are scratched off before battle to grant bonuses like extra damage, speed or nerfs for your enemies like lowered defenses or health. You can even customize the notebook with different images to add even more buffs. When combat begins, Marty uses normal objects mixed with magical powers to defeat the baddies. Objects include a ruler, a cell phone, laser discs, even a battle ship that reminded me of the massive G.I. Joe toy, the USS Flagg. In order to deal massive damage, Marty must charge up a bonus counter. This costs MP. So the strategy is to balance your attacks and your MP to make sure you're not stuck dealing a wimpy x1.0 damage. And one of the coolest things about it, Marty powers up like a Dragonball Z character when he builds the bonus counter. Yeah, DBZ is from the 80s folks! Another big part of the game is defending enemy attacks. When the foe strikes, hitting the action button at the appropriate time can score a “Righteous Defense” which will minimize the damage. Based on how fast and accurate you defeat the enemies in battle, you receive a rank post encounter along with experience and cash. Combat is fun and can be challenging. It's worth it to just see how many funny animations Marty does with the items. For example, if you use the Decoder Ring, it will deal no damage but ads will start popping up during battle referencing the movie A Christmas Story(“Ovaltine? A crummy commercial?”)

The story, like I stated before, is broken up in an episodic adventure. Marty's nemesis, Commander Hood, is a take on Cobra Commander from G.I. Joe. Remember ANY cartoon show where the good guys would be fighting against the bad guys and the leader of the villains is watching everything on some big screen TV or monitor? Hood knows where to take his cue. The dialogue in the game is text based and by talking to the NPCs in the game, you can discover side quests to bulk up to take down the Hood Army. For example, my favorite side quest was fighting the master computer from the movie War Games. Remember, “the only winning move, is not to play.” And you will also enjoy side quests like finding some guy a plunger and curing his toots...wait, what?

Aside from the main story, you can also engage in different modes. These include Endless Mode, where you battle wave after wave of goons, and an Arena mode, where you will fight oversized, gladiator like enemies. There are online leader boards and even helps you gain experience and cash. Another awesome thing about this game, on Steam, is that there are a ton of achievements to unlock!

Saturday Morning RPG is a creative mix of everything I remember from my childhood. The feeling you get playing it brings you back to a more innocent time. Not kidding, I found myself smiling constantly while playing it. Remember when you were young and you played games based off of something you watched on TV? When playing a game wasn't about prestigeing or playing mind games with all the shoto characters online but about sitting down and having fun? A friendly and colorful graphical display, a great score and just a kick ass basis makes this game memorable. Anyone can tell that this isn't some epic game like Skyrim, but I can honestly state, I have never played a game like this before. SMRPG just has a damn, good soul, plain and simple.

Check out everything Mighty Rabbit at their website: http://www.mightyrabbitstudios.com/