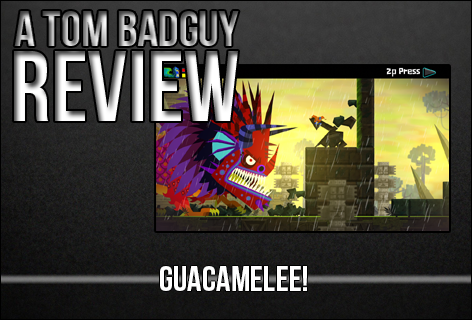 I've had this game on my Steam wish list for a really long time. Just the word “Metroidvania” in the description made me want to sink my time into it. Well, recently a Steam sale for the game arrived and I totally bought it. And excuse me while I say this, but, HELL YEAH! I'M SO GLAD I BOUGHT IT! Honestly, this is one of the games that seems good, looks good, and when you finally get it, plays good. Not a disappointment at all.

Guacamelee is made by a Toronto based independent video game developer called Drinkbox Studios. Now, this is really shocking to me considering that Guacamelee is heavily based on Mexican mythology. The whole game is inspired by it. This may sound ignorant, but I've never heard of anyone from Canada tackle something that has to do with Mexican mythos. Yeah, so, pretty much I raised an eye brow. Before Guacamelee, Drinkbox Studios released two games: Tales From Space: About A Blob and Tales From Space: Mutant Blobs Attack both on PSN and Steam...which I have not heard of or played. That's one of the cool things I like about independent game companies. They come out with a hit game but then you learn that they have done other projects prior. I am totally going to check out their other games and I advise you all to do the same. Now, Drinkbox Studios seems to have a good thing going with PlayStation Network seeing as how all their games are for PSN. The game is available for Xbox One but I don't believe it is on the 360. But, without further ado, lets take a suplex slamming, piledrive-smashing look into Guacamelee!

You like you some mutha fuckin' graphics? Do you??? I think most of us do. Guacamelee looks
BEAUTIFUL. Honestly, it's almost like a high produced Disney film the animations look so smooth and colorful. That's one of the eye catching things about this game. It wide display of colors and fantastic animation style sucks you in. I added this to my Steam list by just looking at the screen shots BEFORE I even read what the game was about. I usually don't do and I'm not really suckered in by shiny visual effects, but that was not the case here. I mean, seriously, stop reading this and go watch the trailers for this game if you haven't already. I won't be sad. Accompanying the visual, eye pussy sensations, Guacamelee also has a bitchin' soundtrack composed by Rom Di Prisco and Peter Chapman. Di Prisco is known mostly for composing the music for the Need For Speed games and also added some additional music for Mass Effect 2. Truly a gifted composer. In fact, if you buy the Guacamelee Gold Edition, you get the soundtrack with the game as well! Pretty sweet deal.

Moving onto the story of Guacamelee, you play as an average Joe, I should say average Juan, farmer named Juan. In this world, Luchadors are praised as the ultimate heroes of the land. Luchadors, or “Lucha Libres,” as you may know, are professional wrestlers in Mexico. They wear colorful masks and perform high risk and high flying moves(think Rey Mysterio for you WWE fans). Juan goes to meet his childhood friend, daughter of El Presidente, when suddenly she is kidnapped by the Evil Charro Skeleton and Juan is killed. He is resurrected though by his new found accomplice, Tostada. You are revitalized and become a Luchador! Together, or just as one of them(the game is co-op), you will travel across the world in search of El Presidente's daughter and attempt to defeat Evil Charro.

As you are exposed to the world, you see that everything is set up like a Metroidvania game. Now, what is Metroidvania? “Metroidvania” is referring to, of course, the Metroid and Castlevania games. Basically, a giant map that you navigate through back and forth, finding new power ups along the way to gain access to new areas you could not previously visit before(seriously though, you should know this shit already). You will encounter enemies you must battle and that's the game play comes in and it is hella epic. Basically, think of the Marvel Vs. Capcom combo system. You start with a ground combo which then turns into a pop up which flows into a continuous air combo which is finalized with an ending move. Only thing missing is a 30 hit super. That's pretty much the Guacamelee combat system. Yeah, it's fuckin' sweet. By defeating enemies, you collect money which you can use to purchase new moves like the Suplex, Piledriver and Drop Kick. You can also purchase health and power meter upgrades. I find the combat sensational. It's really easy to pick up and the combo chains are ridiculously fun and I found myself feeling a great sense of badassery when I completed a long combo. Using one button to strike, one button to grapple and equipment with specific button input special moves, you'll be chucking around baddies and slamming fools left and right. It's a straight up good time. Grinding for gold doesn't even get taxing because the combat animations are so fun to watch. When you get that achievement for a 300 Hit combo, you'll know the feeling of awesomeness I felt.

The game is especially fun with the hidden references and homages to other games. You will see images referring to the Marios Bros, even Castle Crashers. One of my favorite things is when you get a new power to use. You break a statue that looks REALLY familiar, if you're a Metroid fan, to acquire a new ability. Also, when getting new abilities through the game, your “master” is a guy that turns into a goat and back to human again. Now, I know nothing about any Mexican mythos, but I want to read about this guy from whatever story or legend he was pulled from.

Now, the game is not just a beat'em up, there are puzzles as well. For example, you will unlock an ability to change the world from The World of the Living to The World of the Dead. You can change it at will. So, you may be walking down a long corridor and a wall is blocking you. But when you switch worlds, the wall is no longer there. Event the new combat abilities will be required to get through certain parts of the game. Another example, you get a vertical uppercut and horizontal dash punch. Say you need to get to a ledge that you can't get to with your normal jump. You will have to jump, use the vertical punch to get high enough then use the horizontal punch to make the distance. This comes up A LOT in this game, especially when you are trying to get the special hidden items or if you're clearing all areas of secrets. And some of these puzzles get TOUGH. But I won't get into the REALLY HARD ones. You'll have to experience those yourself. Just try not to get too annoyed.

A personal joy of this game is the exploration part. Each map has its own secrets and unlockables that you can find the more abilities you find. There is even a completely separate area of the game that is nothing but challenges you can take on to earn Bronze, Silver and Gold medallions to unlock alternate costumes and secret endings...WHICH ARE HARD AS SHIT. Just sayin. You're skills WILL be tested. I've only gotten 7 Gold medallions and you have the ability to get like, 17. It's pretty tough. But just using your mind and discovering a hidden item is so satisfying. Just like when you play Metroid(man, I wish more games like this exist, seriously, or know what would be cool? If Metroid went back to 2D full time. That would be sick. But I digress.)

Overall, Guacamelee is a game that all gamers must experience. It covers so many genres that I would find it really hard for someone to not like it. If you're a Beat'em up, Metroidvania, exploration, combo monster combat or a casual video game fan/player, you'll more than likely love this game. Not only is it addicting, fun to look at, great to play, and bliss to listen to, it's a remembrance of those awesome times when you played 2D side scrolling games back in the SNES days. Who knows, maybe if this game was made for the SNES back in the day, it would be favorite game of all time...probably not(Chrono Trigger, son) but it would be up there. Honestly, one of the few Steam games I got that I feel is one of the best. I can't wait to see what Drinkbox Studios comes up with next. I hope it's a sequel.

Check out everything Drinkbox Studios at their website: http://www.drinkboxstudios.com/